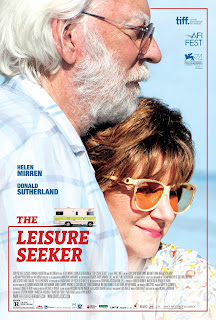 THE LEISURE SEEKER disappoints. Despite having two of the greatest actors working today the film never over comes the sense that we’ve been here any number of times before.

John and Ellen Spencer are truly in the twilight of their lives. John’s mind is fading while Ellen’s body is failing. Knowing time is limited the pair jump into their Winnebago and head off to the Florida Keys. Meanwhile back in Massachusetts their kids are freaking out.

Donald Sutherland is across the board awesome as John. He is sad, and charming and loving and just absolutely wonderful. If I love any part of the film it’s his funny and heartbreaking performance. Helen Mirren is largely Sutherland’s equal. Her only misstep is a terrible accent which is just off enough that you never know where she’s from, it’s just not from here, where ever that here is. They perfectly craft a couple who are the very definition of loving and the sort that everyone truly wants in their hearts.

The problem with the film is the plotting- we’ve been here any number of times before. How many last road trip films have we seen? And while there is always room for another it shouldn’t be one where we can more or less plot out what is going to happen from start to finish. Once things are set up you know how it will go. While there are some wonderful moments (Ellen on the back of a motorcycle arguing with her husband in the RV that he left her behind-he insists he didn’t despite traveling at speed down the highway) there are no real surprises.

Worse the normally perfectly modulated director Paolo Virzi manages wobble the tone. The film is trying to be too much about something with the result we never by it’s urgency.

While not a bad film this is not something I’d run out to see on the big screen. On the other hand the work of two acting titans make this a film to watch on cable of streaming.
Posted by Steve Kopian at March 05, 2018