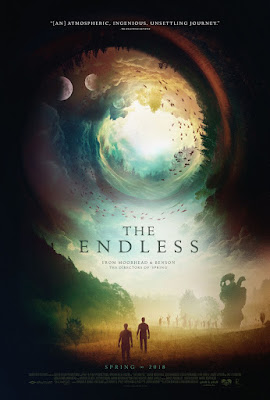 With THE ENDLESS opening Friday, here is a repost of my Tribeca review from last year

THE ENDLESS was a film that everyone who had seen it had warned me to be wary of. The film they said worked for most of it's running time but collapsed in the final third as things went loopy. Normally I would have taken the advice but the description as a modern take on HP Lovecraft was too much to pass up.

The plot of the film has two brothers who aren't happy and barely employed returning to the "UFO death cult" they grew up in in order to say goodbye after they are mailed a videotape message. They aren't sure what will happen when they get there but they go anyway. Once there they are welcomed which kind of surprises them. While the cult isn't happy they are forgiving, as is, it seems, their god an unknown thing living in the woods. The return to the camp begins to set the brothers against each other as one decides maybe they shouldn't have left after all.

Odd ball film makes zero sense even on it's own loopy terms. What the film says is going on makes so little sense that if you try to line it up your brain will explode. Rules are broken left and right to the point that the more you think about it the worse it seems- I could explain the basic lot to you, which would be fine, but the details are such bullshit the film implodes the more you think about it.

In a weird way I like the film. As long as I see it as a story about the two brothers I'm fine with it. The one thing the film has that works is the characters. But as soon as you see it as a horror/science fiction/fantasy film (that is no way scary) the film crumbles because it's so badly written.

To be honest everyone who hates the final third is right in doing so. While we still have characters and moments the actual explanation is, as I've said bullshit.

The choice to see this film is yours.