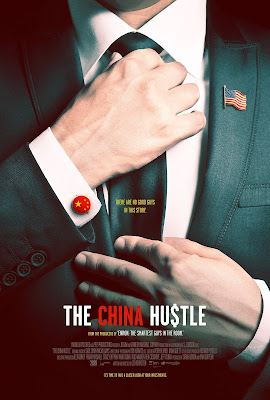 THE CHINA HUSTLE will piss you off. A look at the scams various brokerage house and Chinese nationals are running on the American and worldwide financial markets is frightening since it is creating a situation that is bankrupting millions and while making other fabulously wealthy.

Simply put what is happening is Chinese companies are merging with dead shell companies in the US so they can be traded on the US stock markets. The companies are then pushed by brokers using the promise of getting in on the “great Chinese Market” as a sure bet. The companies value sky rockets and everyone gets rich…

…except most of the companies are shit and not as advertised. Since few people are checking the financials beyond what is on paper the fraud isn’t found out for years, if ever. Those that are checking are threatened with violence or are tossed into jails. The Chinese government is protecting their own. More importantly Chinese law allows them to fuck over non-Chinese without fear of jail time.

It's so bad that some people are trying to root out the bad companies and destroy them through short selling (betting a company will collapse).

Don’t worry if you don’t think you'll understand it all before you go in because THE CHINA HUSTLE will explain it to you so clearly you’ll want to call congress and force them to act.

Beginning by saying that there are no good guys in the story THE CHINA HUSTLE runs through the story a brisk clear pace. It starts with an explanation that there is a belief that China is a great untapped market the film then goes on to explain how low level banks and brokers are creating Franken-companies by mixing crappy Chinese companies with America shell companies. It then moves on to how no one was really looking at the companies, until someone suddenly did and began to realize nothing was kosher with the whole situation. We then see how very few people care because there is too much money to be made shoveling shit.

What is amazing is that pretty much no has any remorse at the crap they spewed out. They were/are making cash and that was all. More amazing is that the guys who are trying to bring the crap companies down are doing so because there is money to be made. As they said at the top there are no real good guys.

I am really pissed off.  When the film was over I wanted to beat some one up. I wanted to call my congressperson and give them holy hell to make them stop this from happening.

One of the most important films of the year, you must see this. You must see it because it will help you understand how over inflated and fake the stock market is.

THE CHINA HUSTLE opens Friday and should be on the top of your must see list.
Posted by Steve Kopian at March 26, 2018