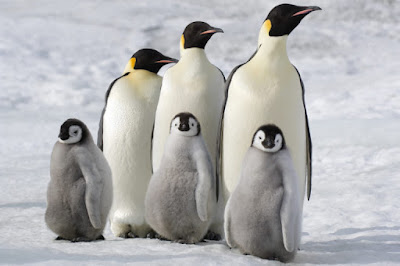 After missing NYICFF last weekend due to train troubles in the aftermath of a bad storm, I headed into the city to do a double feature of MARCH OF THE PENGUINS 2 and the Animators All Around talk. Events that transpired during the interval between the film and the talk prevented my attending the talk,which was a shame. However I did see MARCH... which was a shame as well.

A decade after the first film MARCH OF THE PENGUINS revisits the emperor penguins of Antarctica for a sequel that is among the least necessary in all of movie history.

In its way the film is a retread of the first, basically a life of penguins though this time there seemed to be a bit more slow motion, more under water shots and some discussion of climate change.

We've been here before any number of times not only in the first film but also on a couple of dozen Discovery Channel specials. We've seen this all before.... Which I'm guessing is one of the reasons that one of the producers Disney, passed on releasing this in the US. I'm still pondering why Hulu picked it up, but then again they are releasing it straight to broadcast where animal crazy kids will watch it repeatedly, especially since no animals really die (at least on screen- though we see frozen broken eggs and what are probably dead animals in wide shots).

Incredibly slow and dull the film feels four times longer than its 77 minute run time. I kept hoping it would end but it kept going  and going.

To be honest I really wanted to walk out except that every time I thought it some sequence of beautiful shots would occur and I was reminded that this was the only chance to see the film on a truly big screen (remember this is going to Hulu) so I stayed.

The film plays next weekend at NYICFF and is worth a shot if only to see the images huge. It will there after be seen exclusively on Hulu as of March 23rd.
Posted by Steve Kopian at March 11, 2018