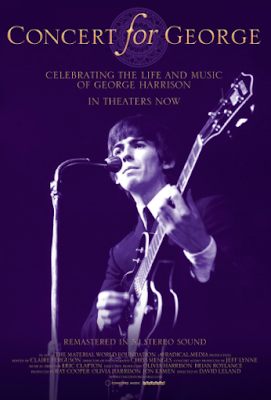 A celebration of the life of George Harrison, A CONCERT FOR GEORGE is a film record of the all-star concert that was held after his passing. It has a large cast of performers from the surviving Beatles, Monty Python, Eric Clapton, Tom Petty and the Heart Breakers, Ravi Shankar,Jeff Lynne and many others

Largely just a record of the concert, but reordered, the film seeks share the night in all its glory. There are some back stage footage and remembrances but mostly this is just the music smashing away any sadness.

As you’d expect there are some real gems here such as Billy Preston’s My Sweet Lord and Jeff Lynne’s rendition of I Want To Tell You which is played under the end credits. I think the placement there is a shame since most people will turn it off once the credits start to roll  and one of the best performances of the night.

How you react to the film is going to depend upon how you feel about Harrison and his music. If you are diehard fan of the man and his music this film will delight. It’s a loving tribute to someone who shaped not only music but the world we know. On the other hand if you’re like me and are not a huge fan the film is going to work best in fits and starts depending upon the moment. Personally other than seeing the joy on everyone’s faces, particularly Dhani, Harrison’s son and the appearances of Monty Python this would have worked better and an album. That doesn’t mean the film is bad, only that the film is more a matter of taste.

A must for fans, for everyone else worth a shot.

A CONCERT FOR GEORGE has been remastered and after a release to select theaters is going out on home video.
Posted by Steve Kopian at March 07, 2018

Email ThisBlogThis!Share to TwitterShare to FacebookShare to Pinterest
Labels: music