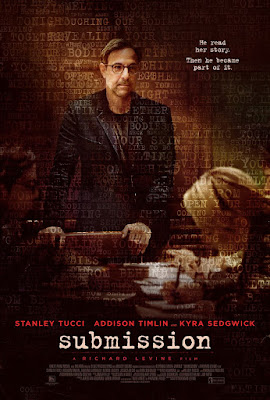 Stanley Tucci plays a college professor and once promising writer who has an affair with a student who has written a killer novel.

A killer cast (Tucci, Janeane Garafolo, Kyra Sedgwick, Addison Timlin) is kind of set adrift and only weakly thrown a life in a film that never manages to generate the heat and the drama it is aiming at. Blame the script which was written by director Richard Levine which never manages to get the tone right. How serious is this supposed to be? In a time when we have all sorts of accusations of sexual misconduct in the news this story should be much more serious than it is.  For what ever reason the film never is as gripping as it should be with the result we really don't care despite the fact that the BLUE ANGEL inspired tale fails to sizzle.

I suspect part of the problem is that the film has a great deal of voice over narration which spoon feeds us what we are supposed to be feeling. While Tucci's narration would make an excellent book on tape, this is a moving picture and the explaining of everything runs counter to what a film is. Honestly half way into the film I wanted to jump on line and see if there was an audio book of the source novel instead.

While not a bad film, and despite the top shelf cast, I really can't recommend the paying for the film. Yes there are times when it all springs wonderfully to life, but mostly it just sort of it  which makes a film worth seeing on cable or Netflix as opposed to paying 15 bucks now that it's in theaters in New York (and LA nextt week)
Posted by Steve Kopian at March 02, 2018