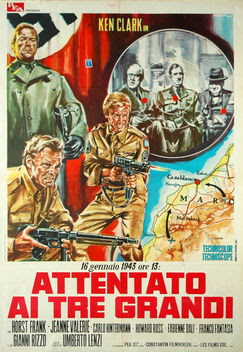 German soldiers with some English background are rounded up and dropped into the desert with out really told their mission. They are to make their way to Casablanca where their objective will be revealed (kill Churchill). Along the way they are helped by an Arab woman with a connection to one of the soldiers and hunted by Allied troops.

Okay war film is an odd mix of unintentionally silly (The cigarette/mine scene or the behavior around the tanks in the following one) and the very serious making for an odd film. The running ironic bit about the German soldiers' disbelief at the failure of the plan from Berlin ceases to be ironic and just funny for the wrong reason.

The unevenness of the tone greatly diminishes what is otherwise a pretty good action film. The action sequences are all quite good and they are what keep you watching even when you're groaning at the awkwardness of the dialog scenes.

Overall its good enough to make you wish it were better. Its worth a bowl of popcorn on a rainy Sunday, but its best to have a second film.
Posted by Steve Kopian at March 03, 2018