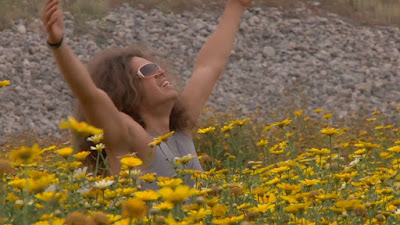 Josh Polon's portrait of filmmaker German Alonso is a bittersweet  look at a filmmaker with a unique talent who decides to roll the dice and make a feature film based on his student film. Where it goes is the film.

German Alonso is a man of great creativity. Working in a variety of mediums he has a creative drive and intuition that is almost unmatched. He is a man who can over come lack of skill by a brilliant counter move. The trouble is he also is easily side tracked, especially by his other great obsession,  with the result that his drive to make his film isn't what is expected.

Bittersweet and really not what you expect portrait of a filmmaker is a must see for anyone looking to make films. Not so much because it's a rousing portrait of  triumph but more a sobering look at what might happen. I know I'm being vague but to explain everything that happens in the film simply isn't all that easy. This a film that is a ride to the end and not a series of easily explained highlights. You really need to see the film and go all the way to the end.

A word of warning the film isn't what you expect. I knew some of hat happened but seeing it play out surprised me. Just give yourself over to it and go.

Recommended when the film plays later today at The Boston Underground Film Festival.
Posted by Steve Kopian at March 25, 2018