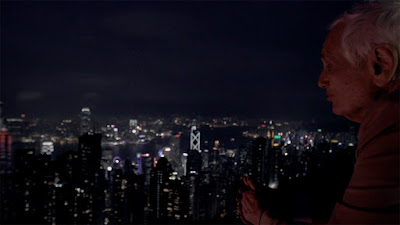 Ines and Ena Talakic's  portrait of journalist Edward Jay Epstein is a rough around the edges masterpiece that is going to get you thinking and talking for days afterward.

The Talakics met Epstein at a party and decided to make a film about him. They lucked out in that Epstein was just beginning his investigation into Edward Snowden so they tagged along as Epstein literally went around the world chasing down details - many that others such as Laura Poitras and Glenn Greenwald missed. As Epstein travels the world he discusses his earlier books on JFK, the media, the diamond industry, and many other subjects.

Part biography of Epstein and part investigation into Snowden this is a film that is so full of information that you'll need two or three viewing to process it all. Based on the post critics screening Q&A I can only imagine what was left out (say the look into things that never panned out).

I am in awe and I don't know what to say. Epstein's work over the last 60 years has essentially changed what we know. He's told us about fake news decades before Trump, revealed that the value of diamonds is artificial and he's told us to question the official story in everything from JFK to Edward Snowden. This film is a fitting tribute to a man who has helped make the world a better place.

I have to congratulate the Talakic's for making such an important film. It is an important reminder of how the need to be fast in news reporting is giving us bullshit on a plate. This four year labor of love quietly and powerfully reveals the need to take time to really find out what is going on.

After the screening I attended a 45 minute Q&A which raised all sorts of issues and added to the shading. It was easily in the top 10 post film discussions I've ever been privileged to see The Q&A also resulted in long discussions after it ended as people engaged the directors and Epstein. (and on into the subway as I talked at length with one writer on with one writer about the film and another once I got into the subway itself.)

Easily one of the best films at the New York Film Festival this year it is not to be missed.

HALL OF MIRRORS just had it's World premiere and it plays again October 4. For ticket and more information go here
Posted by Steve Kopian at October 02, 2017