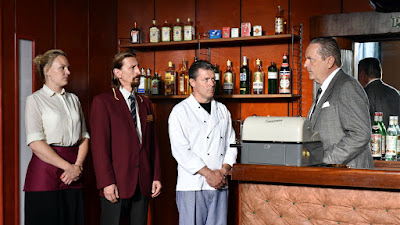 If you know the work of Aki Kaurismäki, then you know what you are going to get from THE OTHER SIDE OF HOPE, quirky characters, lots of humanity, great music and some wonderful off kilter lines of dialog that will make you laugh. It is a perfect example of Kaurismaki's filmmaking

And that's both a blessing and a curse, this is the sort of film that will entertain pretty much everyone but that's about it. We're simply watching the master coast.

The plot of the film has a Syrian refugee coming to find asylum. As he moves in and ultimately out of the system a middle aged shirt salesman decides that he wants a change so he leaves his wife, sells his stock and buys a restaurant. Of course the the to men meet which is the story of the film.

Let me be clear there is nothing really wrong with the film. It is delightful and charming. There simply isn't anything new here.. WHile there is nothing wrong with that I'm still kind of left to wonder what the NYFF programmers saw in this film since unlike say Le Havre which excelled at the festival this is simply more of the same.

If you like Aki Kaurismäki the film is a must, just be prepared to leave the theater wanting more

For tickets and more information go here
Posted by Steve Kopian at October 03, 2017