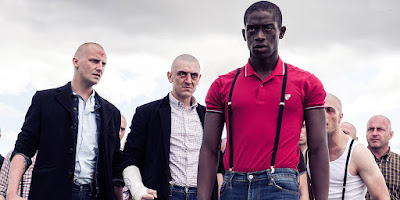 This was one heavy movie! The true story about the childhood of Director/writer Adewale Akinnuoye-Agbaje, known as Anton in the film. In the 1980’s it was pretty common for Nigerian families to voluntarily give their kids away to British families. They would pay them to take care of them for a certain amount of time. This practice came to be called Farming.

Anton’s parents just needed to finish school and get their degrees and then they would bring their son home to Nigeria. This they did, but life in Nigeria was.. horrible to say the least. He wound up not talking for 6 months, and so they sent him back to England, to the family, for them to take care of him and make him “better”

The British family had several other “fostered” kids, think there were 6 or 7 of them, and the mom definitely had her favorites. She was not a fan of Anton to say the least.

This is a story about a boy who feels abandoned by both sets of parents, and winds up having so much inner hatred. He winds up hating being black and trying to paint his face white.

This was a painful film to watch, especially as Anton has encounters with skinheads, and winds up becoming one himself due to his self loathing and immense amount of anger built up.

There was a lot of violence in this film. A lot of scenes were difficult to watch.

The film is good, very well done, but again very very heavy and heartbreaking to know this is based on a true story.. The woman next to me said she felt like she needed to watch a comedy after seeing it, and I felt the same. Recommended but be prepared for its heaviness.
Posted by Steve Kopian at September 13, 2018