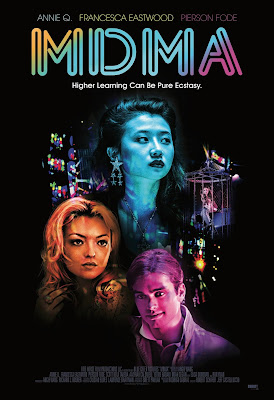 MDMA is Angie Wang’s semi-autobiographical crime drama about a young woman in the early 1980’s who, after arriving at prestigious college, finds she needs money fast. Able to manufacture ecstasy she turns to drugs dealing in order to make money, while at the same time mentoring a young girl whose life has been ripped apart by drugs.

MDMA is a film that I admire more than I like. On the face of it MDMA isn’t a bad film, it’s just that the film is trying to do a little bit too much. It wants to be Wang’s coming of age tale, a true crime story, a crime thriller, and an anti-drug film but it never quite nails a singular tone. This makes it so things don’t quite hang together even though we know they are one story. You have these small sections of the story that could be peeled off and made into singular films chopped down to fit with these other stories.

Blame it in part on the framing device of the flashback which opens with Angie on the down slide. It colors everything that we see as a result. We know she is a little girl lost so we know it’s going into the shitter- but we also know, since this is, on some level director’s Wang’s story, things will kind of work out. It undercuts a certain amount of suspense

Sitting and thinking about the film for about three weeks, I’ve been trying to work out what exactly feel about the film.  There are things in the film I like and some things in the film that are just okay. The problem is that as much as I can go on about, say, how good the performances the fact that the film didn't pull it all together for me leaves me very cold to the film. Part of me wants to walk away from the film but part of me has been fighting with this review for three weeks because there are some good things here. To that end I'm going to leave it to you to decide whether to see MDMA or not.- personally I'm still not sure.
Posted by Steve Kopian at September 14, 2018