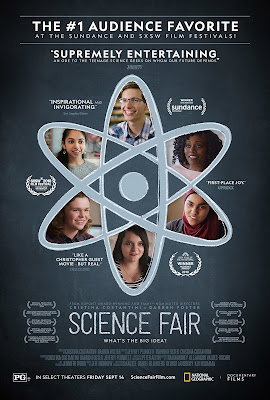 Most high school students participating in this competition do not have the opportunity to earn a varsity letter, even though their work could save lives and alter the future. That isn’t an exaggeration. The projects brought to the Intel International Science and Engineering Fair (ISEF) are amazing. Not to belabor the obvious, but imagine what these kids could accomplish (for our benefit) if science fair competitions enjoyed roughly comparable support and prestige to what most schools bestow on football and basketball. Regardless, the young scientists and engineers keep plugging away in Cristina Costantini & Darren Foster’s kid-friendly documentary, Science Fair, which opens in theaters Friday.

As is the case for typical high school athletic tournaments, students qualify for ISEF by winning various state and regional science fairs. To do so, they produce real research and original inventions. For instance, Anjali Chadha invented a compact detector for Mercury contamination in bodies of water. Costantini & Foster also closely follow Myllena Braz de Silva and Gabriel de Moura Martins from a hardscrabble rural district in Brazil, who have developed a low cost, scalable method for diagnosing Zika. We’re not public health officials here, but these sound like useful projects to us.

Like football or College Bowl, science fair competitors need coaches. Frustratingly, none of the science faculty at Kashfia Rahman’s gridiron-centric South Dakota high school were particularly keen to coach her, but the football coach was happy to support her (good for him, but frankly, most viewers will want to see those so-called science teachers get called out on camera). On the other end of the spectrum, Long Island’s Dr. Serena McCalla is a hands-on coach and dogged motivator, who has an impressive nine students qualify for ISEF.

The students Costantini & Foster follow run the gamut from popular Zenned-out surfer dude to the driven first-generation sons and daughters of immigrants, but they are all wickedly smart and have genuine screen presence. These are good kids, whom the audience will fully and deeply invest in, on an emotional level. With the help of editors Tom Maroney and Alejandro Valdes-Rochin, Costantini & Foster balance their large cast of character with remarkable dexterity. We get a very good sense of who they are as people and decent thumbnail understanding of what their projects are all about. They also keep the pacing peppy, while building towards the suspense of the ultimate best-in-show announcement.

Forgive the cliched term, but Science Fair is indeed a “feel-good movie.” Cheers to Sundance for programming it in its kids section, because has the potential to get youngsters fired up about science. If it could even get science teachers at Rahman’s public high school interested in science, then it would really be getting somewhere. Enthusiastically recommended
Posted by Steve Kopian at September 10, 2018