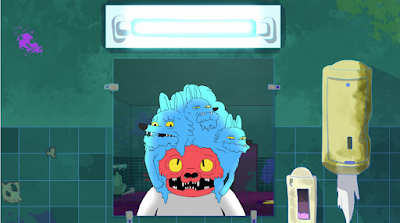 This bizarre animated fever dream about a coyote who is "killed" by some wolves, as is his family as they feast on a dead bison. The Bison then resurrects the coyote in humanoid form and he goes off to get revenge.

Trippy, gross and at times very WTF, COYOTE is a a very strange film. I'm not really sure what I think of it, not because it is so odd but more because I don't think the plot really all hangs together. Its a film that intellectually is all there because I can connect up the pieces but I'm not sure its all on the screen. Something, I'm not sure what, seems to be missing.

That said it is a singular vision and as such is definitely worth a look, especuially if you get the chance to see it at a festival, such as LA where it is playing this weekend.
Posted by Steve Kopian at September 19, 2018