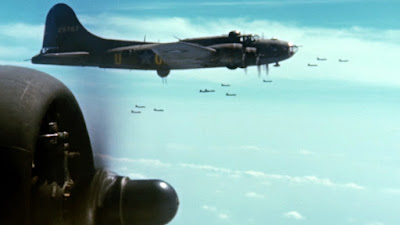 My first viewing of Memphis Belle was when the feature film came out in 1990. With every girl I knew running off to see the Hollywood big screen historical epic the original documentary that in spired it was making the rounds on TV and on home video. I found the film to be a very good look at the war and the men who fought it. It was for me very much of the time.

While I will never one to rave about the film I understand that my viewing of the film the first time, some 45 years after the fact colored how I saw it. I have the weight of history pressing down on me. I’d seen hundreds of documentaries on the war and read dozens of books. I had a steady stream of images from the war coming in to me….

…which is not how audiences originally saw the film. Sitting at home in America most people only saw photos in the papers and maybe a fleeting image or two in the news reels. Seeing what was technically a feature film (it runs 45 minutes five minutes longer than the Academy’s cut off for shorts) about their sons and brothers flying into harm’s way rocked their world. There was no way they were prepared for what they saw. No wonder the crew was turned into instant heroes.

It would be easy to bitch and moan about the exploitation of the flyers for the governments end but honestly we were at war- and the guys were truly heroic.

You’re probably wondering why I’m pondering Memphis Belle, simple, it’s playing the New York Film Festival this year along with THE COLD BLUE which was cut from Wiliam Wyler’s leftover footage. As I write this I haven’t seen the new film, only the original classic film so I can’t tie them together. I can only ponder a film I’ve seen probably a half dozen times and try to come up with something to say to make you want to see it at NYFF. I really can’t come up with anything new to say just that its really good and if you’ve never seen it you should. While that may not sound like much of a reason, once you see the film you’ll be glad which will be enough of a reason to go.

Memphis Belle screens this Saturday and Sunday at NYFF
Posted by Steve Kopian at September 28, 2018