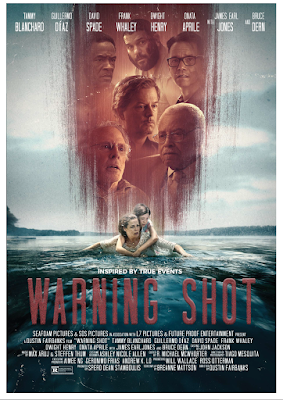 Warning Shot is being billed as a David Spade headed thriller but that’s not the case, Spade only has a small key role. He plays a guy who wants to impress his father and get the water rights for a certain piece of land. The trouble is the land is now in the hands of a mother and daughter. Spade sends two guys of questionable ability to scare her into turning over the rights and it all goes wrong.

A small but enjoyable film Warning Shot benefits from having a sterling cast to sell it. While you are going to notice James Earl Jones, Bruce Dern and Spade the fact that Tammy Blanchard, Onata Aprile Guillermo Díaz and Dwight Henry make the most of their roles in the leads makes it all work even when the script bumps in a couple of places. And as for Spade, he’s really good. While he doesn’t stand out as he does in his comedies, he rightly and completely disappears into his role to the point you forget its him. If he wants to become a dramatic actor I’m all for it since he acquits himself beautifully.

Script bumps or no Warning Sign is still a solid little thriller. It grabs your attention and holds it until the end.