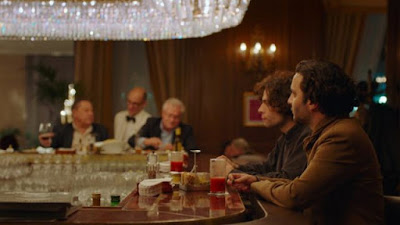 With INTRODUZIONE ALL’OSCURO director Gastón Solnicki becomes one of my favorite filmmakers. Like his previous film, Kékszakállú which played the New York Film Festival two years ago, Solnicki has made a film that requires you to take a step back and ponder not only the subject, in this case his friend Hans Hurch but also the nature of film itself.

When Solnicki learned of his friends death  he traveled to Europe to visit all of the places and things that meant something to him.  Adding in recording of Hurch's voice the film becomes something other than a typical biography. This is not a catalog of events, but an attempt to kind of recreate the feeling one got from being with the person. Yes a person did certain things but what we remember as friends are not the things but the sensations we got from them,say from just seeing their handwriting or going to a place they loved. Hurch was something much much more to Solnicki than events and as a result with INTRODUZIONE ALL’OSCURO, he tries to make us feel what he did.

I don't think I've ever quit seen a film like this before. Certainly I've not seen a cinematic biography where I've walked away from it feeling as though I've gotten to know a person without really ever getting to know someone. Solnicki has done something that is rare in cinema or even biography and made a film where we walk out of the film and feel as though we've just hung out with the person profiled. There is this tactile quality to the film that it leaves us feeling as though we have been in the room with Hurch.  No, we don't get to know everything there is to know about the achievements of the writer, but we get, more importantly I think, a sense of who the man was as some one to interact with. This is the man who lived not the man who achieved.

I am kind of in awe of what this film has done, which is rewrite what you think biography should be. Should we just concentrate on the subject's achievements or should we try to find out who they are or were? I think in many cases knowing the second is more important because it explains and sort of contradictions in lives. By knowing the person we see them as not gods or figureheads but human beings, which I think is much more important.

INTRODUZIONE ALL’OSCURO delights. It is one of the best films at this years New York Film Festival because it opens your eyes and makes you see the world in a new way.  That the film is being shunted off to a side bar showing is kind of a sin because this is a film that needs to be seen and discussed.

The film is playing one time this Sunday at the New York Film Festival and is highly recommended.
For more information and tickets go here.
Posted by Steve Kopian at September 26, 2018