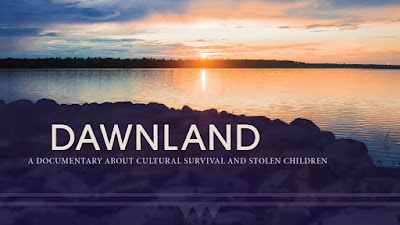 A look at the Maine Commission for Truth and Reconciliation which sought to look into the State's treatment of indigenous children who were often taken from their parents and put into foster care of put up for adoption under the assumption that the kids would be better off not growing up on the reservation.

This is a bracing and eye opening film that is going to open your eyes to a whole world of pain inflicted on the North American people by "well intentioned" (outright racist) stupid white people who broke up families and cultures for no really good reason. I did not realize this was happening even today and I left the film feeling more than a little pissed off.

While the subject matter is important and vital, more so in that I know that the vast majority of Americans don't realize that the separations happened and are still happening, the presentation is a little too matter of fact for such a vital subject. While the film enlightens and enrages I wish it was a tad more in your face so more people would be moved to get off the couch and try to right a very big wrong.

Recommended when the film plays the Camden International Film Festival
Posted by Steve Kopian at September 14, 2018