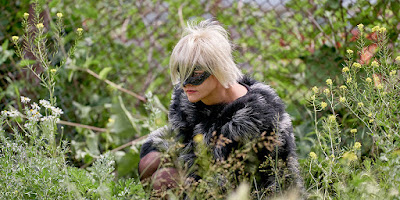 I remember a friend years ago posting about the JT LeRoy story on Facebook when news broke out that JT LeRoy wasn’t a real person, and I wasn’t able to wrap my head around it. It just was really confusing to me. When I heard about this film, I figured that maybe I would now understand the bizarre story.

JT LeRoy was the name a woman named Laura used to write books under. Many authors may have pen names, but Laura created a whole fake person. She would speak to people on the phone as though she was JT, and eventually got her boyfriends sister, Savannah, to pretend to be JT for a photo, the photo led to a photoshoot, which led to her bringing “JT” out in person. Further, Laura, also had a fake personality of being JT’s British agent so that she was everywhere JT was.

Kristen Stewart played the androgynous JT and Laura Dern played the crazy Laura. Courtney Love is in it too

The film is based on the book that the real Savannah wrote. I know there have been other movies about this story, but I haven’t seen any of them, so I don’t have anything to compare it to. The story is bizarre for sure,thought the film was good though. Not a must see, but I recommend it!