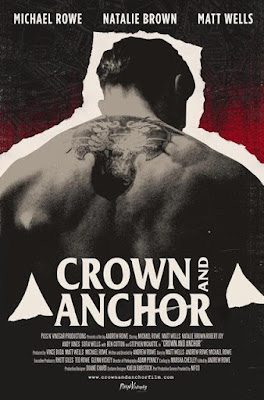 James, returns home to bury his mother and runs straight into the family he sought to leave behind. He especially doesn't really want to deal with his cousin Danny, a low level crook and drug addict who is trying to just survive with with his family. Returning also means that he will have to face up to his past and the things that happened there.

CROWN AND ANCHOR both thrills me and  annoys me. Filled with great performances and some wonderfully written exchanges the film pops and sings in ways that most films don't. There are times and moments in the film that are among some of the best that I've seen in a movie all year. This is a film that I could sing the praises of all day and yet at the same time the film has some bumps which make the film hard to unconditionally rave about from to bottom.

First James takes a very long time before he isn't really one note. For a large portion of the film he is seemingly emotionless except for constant outbursts of violence. Its very hard to get a handle on him or warm up to him, which is problem since he is the lead.

The film is also in need of snipping. Running just over 2 hours the film drags at times. While  Rowe has crafted some killer monologues and exchanges and its kind of a sin  to lose bits of them, the fact is all together they slow things down. While I would be hard pressed to know what to cut but the reality is something has to go to pick up the pace just a bit.

And despite the problems I really like the film. There is a raw energy and a reality we don't usually see. There is more than enough good here to make this worth seeing. Its also good enough that I will be curious what Andrew Rowe does next because, ultimately, what is here is choice.