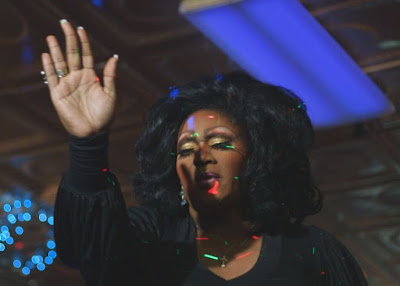 Its arms are too short and its face is eerily dead-eyed and cold. But Christ of the Ozarks—the largest Jesus statue in North America—looms above the tiny town of Eureka Springs, Arkansas. Erected in 1966 by Gerald L. K. Smith, nationalistic right-wing clergyman and white supremacist, the statue was intended as the centerpiece of a religious theme park.

But only the statue and a massive 4,100-seat amphitheater hosting The Great Passion Play, a five-times-a-week reenactment of the death and resurrection of Jesus performed with live animals, special effects, and costumed extras, remain of Smith’s vision. (Since its first performance in 1968, organizers have removed Smith’s anti-Semitic speeches from its original script.) It’s a monument, figuratively and literally, to that specific brand of biblically literal American Protestantism that sees little difference between patriotism and religious piety.

Yet elsewhere in the town lays Eureka Live, the self-styled “hillbilly Studio 54” where drag queens put on bawdy nightly shows. Incredibly, this too is a center of worship in Eureka Springs, as the bar is owned and operated by Gregory Lee Keating and Walter Burrell, a married gay couple who both identify as devout Christians. “Just because you’re Christian doesn’t have anything to do with who you’re fucking. It has to do with who you’re loving,” they explain as drag queens lip-synch Laura Bell Lundy’s “You Can’t Pray the Gay Away.”

All three of these things—the statue, the Passion Play, and the drag shows—are acts of sincere, if unusual, Christian devotion.

The brilliance of Donal Mother and Michael Palmieri’s The Gospel of Eureka is its argument that all three are perhaps equally valid demonstrations of faith united by a shared sense of defiant camp. None of the people who maintain the statue, run the show, or operate the bar are ashamed of their lifestyles or abnormal devotions: they see them as natural expressions of their sincerely held beliefs. It’s this brilliant juxtaposition that makes the film one of the more fascinating examinations of American religion and the meaning of faith in recent cinema. The second act where the Passion Play is cross-cut with drag queens putting on their boobs and faces for a show is worthy of Errol Morris, and its sympathetic warmth towards its motley assortment of weirdos is more Christ-like than any number of Pure Flix monstrosities.