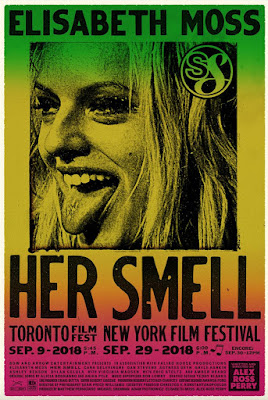 The word out of Toronto was not good regarding HER SMELL. Yea, some people liked it, but most writers, including Unseen's own Ariela Rubin hated it. While pretty much everyone said that the film did improve in the final half hour or forty minutes, most people said it was too little too late.

I mention the bad word out of Toronto because I went into the NYFF press screening with zero expectations. I was expecting a road accident- and on some level the film delivered that. On the other hand knowing it was a mess made me more forgiving. The film is a mess, but it kind of pulls it together in the end for an ending that is emotional, but which you hate because it never earns anything you feel.

Elizabeth Moss plays one of the most monstrous characters ever put on film. A horrifically self centered nut job, Moss runs over very one  she comes in contact.  She is cruel violent and nasty.  She starts as  monster and gets worse.  Over the course of three or four extended sequences we watch as her piss poor behavior drives everyone away and breaks her.  We then get two sequences that head toward a kind of redemption.

There are a lot of problems with the film and I could talk about them for several hours  but I'm not going to do that. What I do want to talk about three major problems.

The second is Moss's performance. Yea she is great at playing batshit crazy. And yea she is affecting in the final scene but there is no modulation. There is no degree. Its all eleven. Yes its a show role that might nab her an Oscar nom, but honestly its a crap performance.  Its not just one note, or maybe two note, but it is also very calculated. You can see Moss not so much acting, but trying to work out how to go even crazier.  There is nothing behind her eyes other than a calculating actor trying to win her Oscar.

The last and most damning thing wrong with HER SMELL is the structure. Essentially five moments in time we know nothing other than what happens in them.  We get three scenes of a raging bitch on fiery wheels and then we get two scenes of redemption. The problem is Moss is so monstrous there is nothing there to suggest a reason why we should care. Why is she deserving of the love of everyone she dicked over? We never know.  Are we simply supposed to suddenly like her after she's raked her friends, family and the audience over the coals? Apparently.

While there is no doubt emotion in the final moments it is never truly earned. Yes we get a reason in those final minutes but to really feel good about accepting it  requires that we ignore everything else that happened, much like a when a child who brutally kills its parents turning around and asking for sympathy for now being an orphan. Its bogus and bull shit and it wrecks the film.

Should you see the film? If you want to be abused and tricked and shit on yes. And while I will grant you the final sequence works, everything else doesn't. I would skip it. 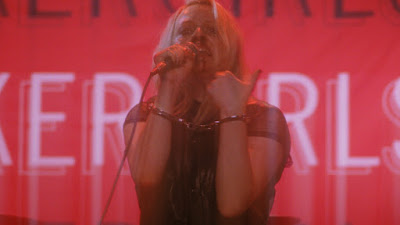