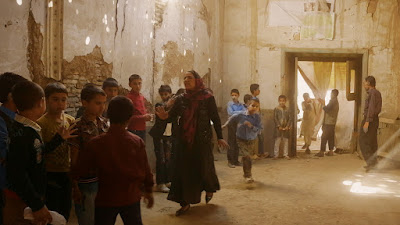 Angels Are Made of Light follows the lives of several students and teachers in a Kabul. We watch as they go through their daily routine and ponder their lives and futures.

Good but kind bland film about life in a country at war. We watch the daily life of the various subjects while listening to their thoughts in voice over narration. It gives us insight into what is going on in their hearts but it never quite generates the necessary level of excitement, at least to support a two hour film.

The problem is the film is so very earnest in what it is doing and seeming so intent on being good it ends up being bland. In a weird way I got the sense that it wants to be a purely observational film and it stands back and outside a lot of what it is documenting. And yet there wasn’t enough insight into the various people so they added the voice overs. It’s beautiful to look at but it never is quite compelling.

While I like the film, watching it I get the feeling that the film has gotten slots at festivals such as Camden, Toronto and New York not because the film is truly great but because the festivals have respect for James Longley the film’s director. I say this because there are so many other better films out there that have not gotten a shot at the big stage but should have.

Recommended for those with interest in the subject but not for general audiences who are advised to look elsewhere.
Posted by Steve Kopian at September 16, 2018