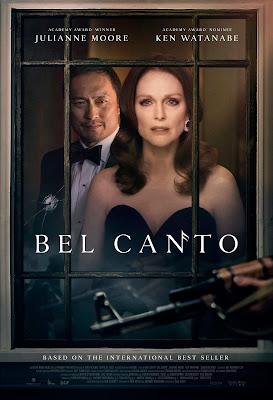 BEL CANTO is based on a novel about a hostage crisis that occurred in Lima Peru. While that is not particularly special, the fact that star Ken Watanabe was supposed to be at the party is probably the most interesting thing about the film.

The film is a the story of a Japanese business man who goes to a South American country to see about setting up a new factory. At a party in his honor his favorite singer, played by Julianne Moore, is to perform. A group of rebels, thinking the president is there, attacks and ends up taking hostages.

A strangely passionless film, it is kind of devoid of any hint of what has made the novel by Ann Patchett such a perennial best seller. That it comes from writer director Paul Weitz is also a bit odd since in films like ABOUT A BOY and GRANDMA he generated real feeling. Watching the film  my interest wandered and I started doodling in my notebook. While I was curious to see how it played out, I wasn't curious enough to devote my full attention to it.

I know that I truly broke with the film during the first scene where Julianne Moore sang. The lip sync was so awful, that it was very clear that Moore wasn't singing and I gave up on the whole film.

Is BEL CANTO a bad film? No, not really but there is no need to run out and see it.
Posted by Steve Kopian at September 13, 2018