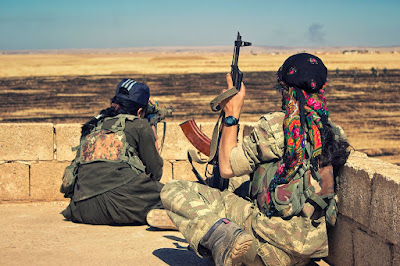 Haunting film about Aryan, a young woman who was wounded while fighting with her all female military unit to retake a village in Syria.

Aryan knew that she had to do something so she left home and joined and group of women fighting in Syria. As the film opens we see her recovering from the wounds she received during the fighting. Her wounds were so bad that the doctors thought she would die, but she told them she wasn't going to die because she "had things to do".

Following Aryan before and after her injuries, we come to know and love her and her resolve to do something important. She knew from an early age that the typical life of marriage and family wasn't for her and we watch as she leads her troops and makes a difference in the fight for Syria.

Showing us  a side of the war we have not seen before, director Alba Sotorra puts us into the life of her subject in a way that few documentaries ever manage. Not only are we in the physical space but also the mental as Sotorra makes sure we are always focused on Aryan's face so we are always aware of the thoughts and emotions flashing behind her eyes

(Note the title of the film spells the name as Arian, the subtitles as Aryan)
Posted by Steve Kopian at September 10, 2018