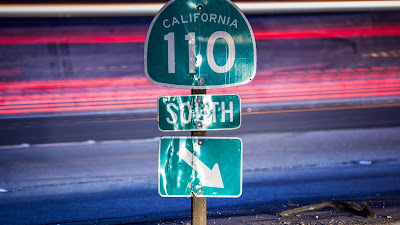 On its surface, Adam R. Levine and Peter Bo Rappmund’s Communion Los Angeles seems like the kind of dry experiment in cinematic form only consumed and appreciated by ivory-tower critics and semiotic theoreticians who discuss the films of Isidore Isou, Hollis Frampton, and Michael Snow in hushed, reverential tones. At only 68 minutes, it charts the length of Interstate 110, the oldest freeway in California, as it snakes its way south from San Pedro through Los Angeles towards Pasadena. It has no plot, no story, and though there are one or two passersby interviewed, no characters. It’s simply a cinematic record of a freeway and its presence in the communities and environments it passes through.

This is cinema as imagined by Guy Debord and his band of Continental psychogeographists: an examination of the symbiotic relationship between people and places. If this sounds dull, it’s only because you haven’t witnessed Levine and Rappmund’s mesmeric kino-eye: shot entirely in still shots and rapid stop-motion photography, the film transforms even busy highways into semi-static landscapes. Combined with the random unseen chattering of those found along its route—street poets and street perverts, homeless dandies and radio hosts—the effect is at once hypnotic and terrifying, ecstatic and spellbinding. Before long the film lulls you into a stupor as the freeway slithers past palm trees poking up behind empty reservoirs canals and rusty old pumpjacks in the middle of parking lots; quaint one-story homes in the shadow of factory smokestacks and rundown two-story houses decaying in the California heat; dead birds smashed on the pavement, dusty horses wandering construction sites. Soon the rhythm of the cities reveal themselves to us in subtle ways—at night when the shops and banks lie shuttered like corpses and the tail-lights of midnight traffic blaze like neon lettering, the solitude of empty bus-stops and the noise of crowded taco trucks feel like enigmas into unseen, unspeakable patterns.

In many ways the film feels reminiscent of Joji Koyama and Tujiko Noriko’s Kuro (2017), another work that juxtaposed invisible narration with urban landscapes to create something meditative and ephemeral. Communion Los Angeles is by design not a documentary for everyone—many people might scoff at the idea of it being a documentary at all. But to those with the right eyes to see and the right minds to understand, it’s a revelation.