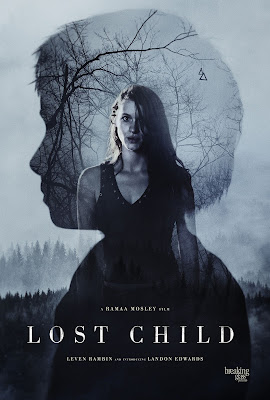 Ramaa Mosley's LOST CHILD is being billed as a PTSD thriller with possible supernatural overtones. I think that is over selling what the film is, which is a solid drama about some lost people.

Leven Rambin stars as Fern a returning vet. Home after a long deployment she is desperately trying to find her brother, a troubled young man with issues of his own. While out looking for him she discovers a young boy wandering in the woods. As she tries to find out who he is suspicions arise that he might be a Tatterdemalion (the film's original title), a shape shifting spirit.

Solid and well acted drama is never really as scary as they would like us to believe. While the film is always gripping, it is because the story the film is telling is a good tale and not because there maybe spirits walking around.

While the film is having a kind of identity crisis with a title change from a supernatural creature to a more generic mysterious one, the film always has been a nice little thriller worth your time when it hits theaters Friday and VOD next week.
Posted by Steve Kopian at September 11, 2018