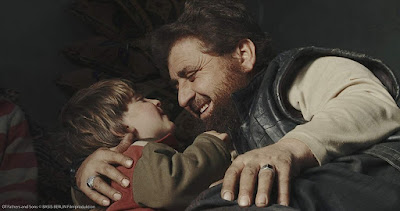 Deeply troubling and disturbing look at the father son dynamic in a group of jihadists in Syria.

Director Talal Derki fled his home country when the war in Syria stated and the jihadists moved on his home town. While living in Berlin he decided he needed to go back and see what had become of the place he had grown up. Pretending he was a true believer wanting to spread the word he went back home to film daily life. What he returned with was a portrait of a people who believe in their cause and are raising their children to carry on their fight- while at the same time revealing that they are still very much like us.

I was left reeling by OF FATHERS AND SONS. While most definitely about a bunch of people who would have no qualm about killing everyone I know for their belief, the film also shows us a tenderness between family and between friends that is missing from the vast majority of films about the jihadists. It’s the little moments, jumping in a pool, playing games and the showing of affection that runs counter to the talk of death and destruction in the name of Allah. It’s as if it is a grand other dimension of a world that is like our own but not.

What also makes it kind of trippy is that for the most part everyone is aware the cameras are filming. Everyone is playing to the cameras and putting on a good show. It makes for odd viewing, not like the recruiting videos we’ve seen , but “let’s put on a brave face” even as a limb is lost and things go on.

As the film went on I just stared at the screen, not reacting outwardly but coping with a torrent of emotion inside. What was I supposed to feel? I don’t know- but I do know that three weeks on since I saw the film the film still haunts me making me ponder things I don’t want to think about.

Disturbing nature or no, I highly recommend OF FATHERS AND SONS when it plays at te Camden International Film Festival this weekend.
Posted by Steve Kopian at September 12, 2018