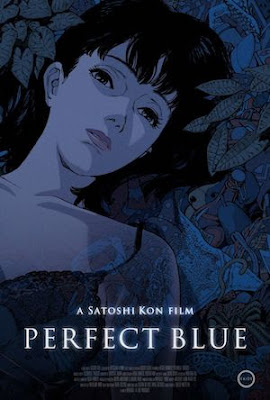 With PERFECT BLUE playing Friday for a week long run at NYC's Metrograph, and hitting thears via Fathom Events here is a repost of my review which was written right after director Satoshi Kon passed away

Based upon a novel by Yoshikazu Takeuchi, Satoshi Kon took this tale of obsession and turned it into one of the best films Alfred Hitchcock never made. The story, full of mistaken identity, hallucinations, and murder, is exactly the sort of thing that Hitchcock would have loved. I’m told that Kon shifted things around for his own reasons and in the process created one of the best thrillers of the second half of the 20th century.

The first time I saw this film I was sitting in my living room, reluctantly putting the film on because there was really no other choice that night...and ending up being blown away. I thought it was going to be a film that I had on as background noise; instead I found myself sitting bolt upright wondering what in the hell I was seeing. It was clear from the outset that there was a very good reason that it garnered reviews on the local TV stations when there were plenty of other major releases that weren't being covered.

The story concerns a woman who is trying to move away from being known as a pop singer. However, her choices include roles in films depicting rape and other unpleasantness. In the process her grip on reality begins to crack, more so when a super-fan begins worming her way into her life.

The reason this film works as well as it does is that the tale of identity and perception is perfect for animation. Because the film is animated, the shifts in reality are seamless. We are in the minds and eyes of the characters, and what they see, we see, and the effect is enthralling and disorienting. Kon uses our acceptance of animation to bend our minds. Sure the story is more or less a real world thriller; but when he gives us moments like a girl leaping from lightpost to lightpost we’re left wondering how long we’ve been out of Kansas, and why we never noticed.

What made Satoshi Kon one of the greatest filmmakers ever was simply that he knew what medium to use to tell the story he wanted to tell. If he wanted to create a world where anything is possible (say in his Paprika), he had to use animation. Yes the computer generated effects of today’s films are amazing, but at the same time you know they are effects. We may believe the dinosaurs in Jurassic Park, but at the same time we know they aren’t real. Kon’s use of animation circumvents that. EVERYTHING isn’t real...so everything is.

And I do mean that he tells the story the best way possible, since the same source story was used a few years later to make a live action film. That adaptation loses much of the complexity and coherence because of the limitations of shooting live action. That film, released in 2002, is just an incoherent mess that seemed more interested in skin than scares. (Forgive me if I’m wrong in the details, its been almost a decade since I’ve seen it and I didn’t feel the need to go back and see it again)

This film is a masterpiece. It was clear watching that film a decade or more ago that I was watching the calling card of a filmmaker who was out to take no prisoners.