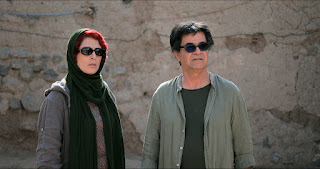 In 3 FACES director Jafar Panahi contacts actress Behnaz Jafari and tells her that he has received cellphone message saying that a young woman who was forced into marriage had killed herself when her efforts to reach Jafari in the hope of having her convince her family to allow her to act failed. Uncertain if the message was real or not the pair head off into country to try and find out what actually happened.

Panahi banned by authorities from making films continues to do so low budget and low tech and we are better for it. While specifically about the restrictions placed on women (and filmmakers) in Iranian society, the film transcends its specific culture to instead speak to a larger world where restrictions are placed on everyone. Of course this being a film by Panahi there are other themes at play here such as notes about celebrity and community.

For me it took a little while to get into the film. It opens with a long drive to the village where our leads discuss the video and life. It’s shot in a couple of long takes the sequence is more like listening in on someone’s long conversation at the table next to you at a diner. It’s interesting in regard to the parts that are connect to our lives but there is a lot of extraneous material (though I will say Panahi's phone call with his mother amused me.) For my taste it went on a bit too long. Yes I know why the scene exists as it does and I understand we get to see the emotional distress of Jafari at potentially having a hand, even if unintentional, in a suicide, but it didn't feel natural and screamed of importance.

Fortunately once we arrive at the small village this film works like gangbusters. The interplay between the leads and the people of the village is much more interesting than the long drive to the village. Here the film is allowed to breath. Life happens. The ideas that Panahi is trying to explore take root and we get to ponder what we are seeing and aren’t being led. I finally clicked with the film.

That the film works is thanks to the wonderful cast. The towns folk are charming and Jafari is her typical radiant self. I don’t think she is capable of a bad performance.

A small gem 3 FACES is recommended.