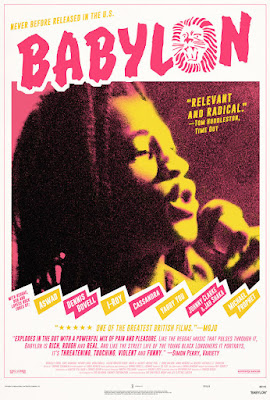 For pretty much everyone reading this review the name of Sally Willis will mean absolutely nothing. She was one the most influential people I have ever known. Addicted to life and everything in it she was someone who went and did and never looked back. She heard about Woodstock when she saw it on TV and decided to take her kids and just go. She went places and did things that most people would never consider doing, even now. She also had a deep love of music and movies which is how we bonded when I was working at video store in the late 80's and early 90's.

She knew more about movies than most college professors and rabid film fans but all the knowledge just was there to pop out at odd times. She would tell me all sorts of thing I never knew and pointed out films I never heard of and opened my eyes to all sorts of films I never considered...which is why I am mentioning her in this review of a 1980's film that has never been released until now. Sally not only knew of the film but had a bootleg copy back in the late 80's, and she was determined to get an official copy if she could. She wanted a copy of the film because she loved the music. Sally loved films with reggae music and anything from the Caribbean so she had copies of a ton of films that had any sort of the music in it.

BABYLON was one of the films she loved and she would periodically remind me to keep an eye out for it so she could pick up a copy. I  know I had asked her to borrow the film but she wouldn't loan it to me. It was not  because she didn't trust me, rather it was because the dialect and patois in the film was tough to navigate  and she didn't want me to see the film is I wasn't going to be able to follow what was going on.

I did make a stab at the film one night when I house/dog sat for her but she was right, I had a hard time truly comprehending the dialog so I gave up and went on to Children of the Paradise. After that attempt BABYLON was largely forgotten except when she's ask if I could get her a copy now and again.

I bring this story up because about fifteen minutes into the film I suddenly realized what this film was and that because of a good friend I had seen what is being billed as a great film no one in the US had seen.

BABYLON is the story of a reggae DJ who has to struggle find a place in a world full institutionalized and ingrained racism. We watch as he loses his job, tries to make it in the music business and is pushed toward an act of violence by a world that largely doesn’t care.

This is one of the social realist films that were proliferating in England from directors such as Ken Loach. The films which examined what it meant to be living not just in England but also under the thumb of Margret Thatcher the lower classes, especially those who weren’t white, were run over by conservative progress. Shot on location and using the language and accents of their worlds the films were often subtitled because more most audiences couldn’t understand what was being said. The use of real locations and real accents bled out of these films and into the larger film world (Robbie Coltrane’s character in the Long Good Friday, released a year or two later, is almost indecipherable to many people)

The film is a gritty time capsule of London in 1979 and 80. It feels raw and lived in. There is a real sense of what it means to be a young black man in Thatcher's England, which is odd since the film's primary creators were largely white men, and while they were outsiders and immigrants to England, they are not the sort of people you would think would behind a film like this. By all accounts they got it exactly right and the film still has a strong following with people who identify with the film even today. That so many people connect to it almost 40 years on is clearly a sign of great cinema.

This is a beautifully made film with feel for its characters it uses the almost constant stream of music to drive the narrative and to underline the emotional through line of the tale. Looking at the film in probably close to thirty years I completely understand why my friend Sally was in love with the film. This is a film that is firing on all cylinders and is a perfect example of how to make a film that does more than just tell a story, but reflects its time and space.

Recommended when the film finally hit US theaters Friday.
Posted by Steve Kopian at March 06, 2019