Assault on the Pay Train (aka Train Robbery Confidential) (1962) 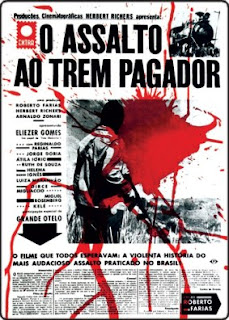 Based on a 1960 train robbery this film does the unexpected and begins with the robbery and the follows the after effects through the gang. The result is a real and raw look at the society and poverty that caused it to happen.

A gang of men manage to pull off a daring robbery of a pay train. The men  are all paid off and told they can only spend ten percent of the money a year lest the cops catch on. They also must watch each other to make sure no one does something stupid. But they get stupid, spending freely and shooting off their mouths, and the cops begin to piece together what happened.

A kind of realist film noir this this a film that reveals ho crime doesn't pay but also makes clear why people are willing to turn to it. It also shows us the devastation left in the wake of the crime as lives are pulled apart and family broken as the men who stole the money are hauled off to prison or worse.

This is a small gem of a film that is criminally under seen. In an age where we are rediscovering small and important works of cinema, especially ones that highlight social ills the fact that ASSAULT ON THE PAY TRAIN is on no one's radar is a sin. While it is first and foremost a solid crime drama the fact that it was shot on location and highlights the places that spawned it make it all the more worth tracking down.