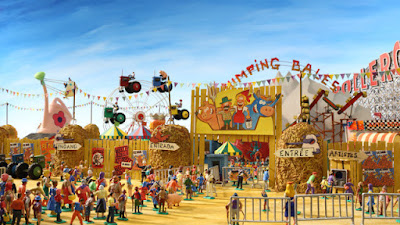 Cowboy, Indian and Horse are back once more and we are better for it. This time out Cowboy and Indian bomb a big test so Horse won't let them go to the agricultural fair (in the English dub it's called a county fair). Desperate to go they study hard and ace the test, but horse slips on a skateboard and can't remember where the tickets are....and at this point things get even more surreal than before.

Wickedly funny short is stretches our good will to the limits but never loses it as the looping gag of the second half sees to go on a bit too long...thankfully though just as we are certain it can't go any father things go left and the laughs continue.

I'm a huge fan of the films and I have to see each new short as it come out so I'm always schleping to the New York International Children's Film Festival to see the newest in the series. I'm never disappointed. If you can get to one of the two remaining screening on March 9 and 10 I recommend you do so. (Tickets here)

COWBOY HULK which has Cowboy eating something from space and turning into a red beast when angry. Its twisted fun

RETURN TO SCHOOL about Cowboy and Indian trying to win a trip to the moon. totally bizarre and very funny.

And one whose title I didn't catch which is less about the Panic characters than two campers who keep annoying everyone. While good, this is probably the weakest of any Panic film  largely because all the characters are only in it fleetingly
Posted by Steve Kopian at March 03, 2019