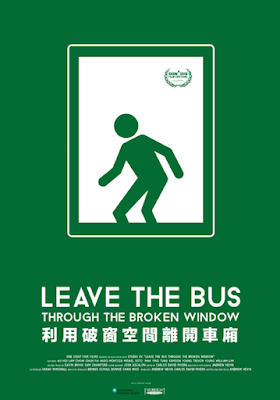 Andrew Hevia decides to go to Hong Kong to cover an international art show but is completely unprepared for the trip not speaking the language, understanding the culture or knowing anything about Chinese history. He flounders and begins to turn the camera on himself.

Bittersweet and darkly funny, LEAVE THE BUS THROUGH THE BROKEN WINDOW is wicked documentary about a guy in a place he probably shouldn't have been. Yes, he manages to get along and make something of the trip, but its clear he is in way over his head and is just fumbling his way along. It makes for an amusing and sad experience especially in light of the narration, which read by an mechanical female AI voice and comes across as judgmental.

Say what you will about Hevia's wanderings, the film has a glorious sense place and you really get a sense of the city of Hong Kong better than almost any other film you'll see. This is the ground level huan Hong Kong and not one made up for the cameras. I want to compare it to the home video footage that a friend of mine shot on their trip to China. While normally saying something is home movies is a bad thing, in this, and the case of my friend's footage, it's a good thing because its not images and places that look good, but rather where people dwell. You are in their world and we are better for it.

This film is a kick in the pants. Beautifully put together it is long enough to make us feel like we've had a meal and short enough never wear out its welcome.  This is the sort of hidden gem thatI'm going to be recommending to friends as it makes its way through the various festivals.

LEAVE THE BUS screens again at SXSW as follows: 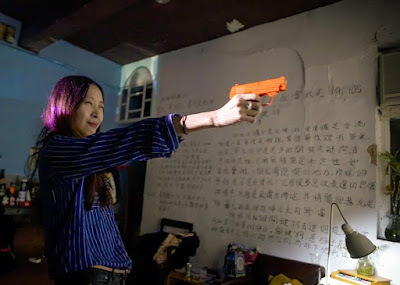