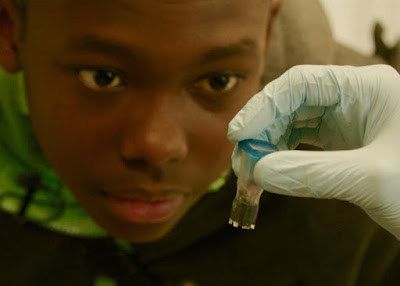 Human Nature is a look at our ability to splice genes and thus manipulate the lives and beings of every living thing on earth.

I am not certain what I think of Human Nature. While the film is full of great information and wonderfully doesn’t talk down to the audience, thus making it one of the best explorations of the subject in any media that I’ve run across. it has a couple of problems that kind of keeps me from jumping up and down and raving about it.

First the telling is so restrained that it never fully engages. I loved at what I was being told because the film simply and expertly gets the science across. The problem is it really straight forward. It remains on a single emotional level and stays there always tickling the head instead of the heart.

The other problem for me is it never really goes into the dark side. While the hubris of what happens in Jurassic Park is discussed, it is largely poo pooed as something that scientists would never do. Yes even the talking heads about how they might make changes to their children, while down sides like breeding kids to be super athletes is discussed the tone of it all always seems to be “yea we could do those things but other than for a purely good reason we wouldn’t do that”. While I would love to accept the altruism on it’s face I’ve been around the block to know that while saying they would all do the right things doesn’t mean that’s what would happen. Let’s face t there is too much money in doing evil.

And despite my nitpicks I like the film. I love that the film beautifully lays out everything you need to know to have at least a basic understanding of the subject. I just wish it was a little more realistic and a little more exciting.
Posted by Steve Kopian at March 12, 2019