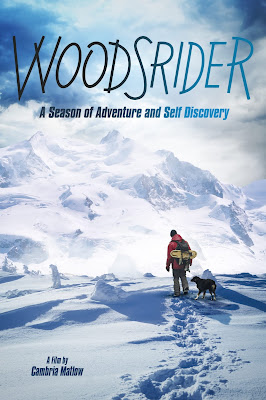 Woodsrider is a film about Sadie Ford.At 19 she drives off to the wilds of the town of Governments Camp to snowboard and to just be alone in the wilderness with her dog.

Low key documentary is going to delight audiences that click with low key off the grid vibe. – is a kindred spirit to many of the crazy mountaineers we see profiled who go off and simply go from mountain to mountain without a real care in world. Sadie just wants to snowboard and hang out in the wilderness. Yes she occasionally goes back to town to hang out with people but mostly she just is.

The problem with the documentary for some is going to that this is film this is reflective and meditative. There is a kind of Zen observational quality to it that is going to drive anyone who wants explosions and gun fights up the wall. It’s kind of like if Frederick Wiseman made a film on a snowboarder.

I like the film and its quiet nature. If you think that is up your alley then I heartily recommend the film.