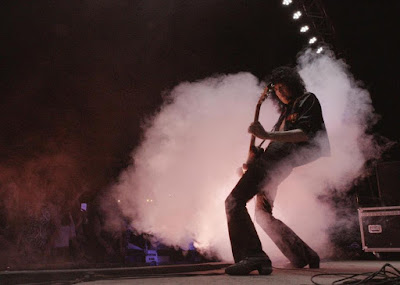 Portrait of Akio Sakurai aka Mr Jimmy, who played Jimmy Paige's music note for note in small clubs in Japan until the man himself saw him and gave him an ovation. He then went to America to try and make his mark as part of Led Zepagain.

Good looking and good sounding documentary is going to be a love it or loath it for most people. If you are a huge fan of Zeppelin and Paige then there is a good chance you will love the film since the film has a great deal of the legendary group's music expertly played. If you're not a fan of music or you don't click with Mr Jimmy's obsessive nature this is going to be a long haul as the film spends a lot of time allowing him to talk of his obsession (he even ants his costumes exactly the same as Paige's) and showing us form over content  sequences that don't really do much other than look good and kind of ape the arty sequences in THE SONG REMAINS THE SAME.

I found myself in the second group early on as Jimmy was going on about the way a Paige jacket sat on his shoulder and my interest began to wane. I probably could have pulled myself back from the brink if there seemed to be more to Jimmy than his obsession, but there really isn't. This is a man who lives to play but for me that simply isn't enough to support a two hour documentary.

On a purely technical level director Peter Michael Dowd has made one of the best looking films of the year. Filled with incredible images and stunning sequences  Dowd has made a film that takes us to the heart of obsession and makes us shake hands with it. I would love to see what else he can do with a story. At the same time I really wish he could have made me care about his subject more. Yes I stayed to the end through Dowd's skill in putting sound and image together but not because I really cared about his subject.

MR JIMMY premiered last night at SXSW and plays again on the 11th and 14th. Mr Jimmy will be performing on the 13th at midnight at the Dirty Dog Bar.
Posted by Steve Kopian at March 09, 2019