DEPRAVED frustrates me. It is so damn close to being a great film I want to scream. It is at times one of the most thoughtful riffs on Frankenstein you'll run across and at others its just an okay inde film.

A young man leaves his girlfriend after a fight. As he walks the streets he is set upon by an unknown person and stabbed to death. Waking up in a new body and unsure of who he is Adam has to relearn what it is to be human as well as deal with Henry his creator and the madness of Polidori his "assistant". As Adam learns more about who he is and how he came to be the stage is set for a grand tragedy.

Writer director Larry Fessenden has made a intriguing film. Updating Mary Shelley's tale to modern day Brooklyn, he shades it  not just with a mad genius trying to usurp god but with thoughts of trying to help those left broken by war. Henry's trying to heal those killed and hurt in our current wars. In doing so he truly makes us debate the notion of what Henry is doing on a more practical level than almost any other version of the tale.

This being a  Frankenstein film we also get the requisite riffs on what it means to be human and the struggle to truly discover who we really are. Fessenden's takes have unexpected resonances and get the mind working in ways that most of us haven't considered before.

This is also a film that is often visually delightful. There are short montages and overlays that  add a sense of what Adam is thinking. Adams look is also incredible. While I'm uncertain about how or why some of the scars are there it still looks impressive.

As much as I like the film there are things that bother me.

While I appreciate Fessenden treating the proceedings almost as if it is a drama, the tone of the film never quite feels right. There is a strange lack of suspense because on some level we know how this is going to go. As a result there is a lack of engagement as I was intellectually invested but not emotionally.

I'm also not sure about the Polidori character. The dark soul pushing Henry and events, he is the one character who seems out of place.Where pretty much everyone else seems, for the most part, to be or could be a real person (and I am including Adam) Polidori feels out of place. I don't know if it is the performance or the role, but he feels like he exists simply to push events along. It weakens things more than it should.

The film also has a problem with pacing. The film feels every one of it's 115 minutes with some bits feeling a little too long. There was a point around the half way point when I realized that there was still another hour to go. It's never fatal but it gave me time to think about some of the problems of the film instead of being carried past them by the momentum of events.

Don't think I hate the film, I don't, but I am frustrated because what is here is good enough that I should have loved it instead of just liking it.

Worth a look for fans of thoughtful rethinks of classic tales 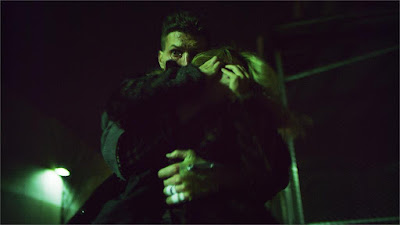 Email ThisBlogThis!Share to TwitterShare to FacebookShare to Pinterest
Labels: american, horror, science fiction, What The Fest 2019