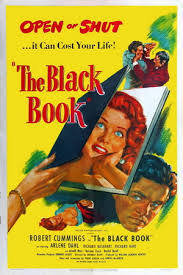 Anthony Mann’s Reign of Terror/Black Book has been a public domain staple for decades. Appearing in cheap DVDs and VHS copies for years I have it I don’t know how many oldie thriller sets. Amazingly I had somehow never managed to see it until I saw it Brooklyn Academy of Music’s Joe Dante retrospective. Dante programed he film as one of his influences. We were not told how it influenced him but it’s good enough that it’s not hard to imagine how it could.

Set toward the end of the French revolution’s reign of terror, the film has Robert Cumming’s anti-Robespierre hero taking the place of a “prosecutor” from Strasburg who was sent for by Robespierre. Its seems that someone has stolen the infamous black book in which all those to be denounced are listed. It must be discovered before the convention which will make Robespierre dictator of France. Complications arise for Cummings as an old love shows up and Robespierre and his men are running a larger game.

A taught thriller I’m at a loss as to why the film isn’t better known. Yes it’s workman like and very much of it’s time but it dos what it does with incredible skill and is a hell of a lot more entertaining than most other films from the same time. It’s a film I would gladly put on again and again.

The love of the film as sealed for me with the sequence in the farm house when soldiers are looking for Cummings, his girlfriend and the black book. Roused by the approaching soldiers Cummings flees leaving the book behind. A game of trying to hide the book and not let anyone know it’s there ensues and it’s a sequence worthy to be compared with the best of Hitchcock.

I can’t say enough good about the film other than see it- and if you can see it big.

An absolute delight.
Posted by Steve Kopian at March 17, 2019