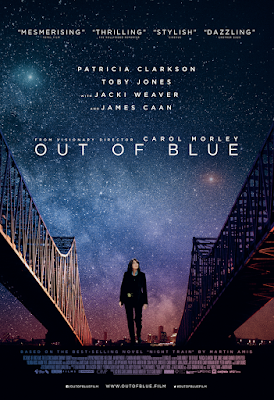 An astronomer is found dead inside of her observatory. Low key raspy voiced detective Mike Hoolihan (Patricia Clarkson) is set  on the trail of the killer which has echoes to a long ago serial killer.

Based on a Martin Amis novel called Night Train, which was changed enough that they altered the title, OUT OF THE BLUE is either going to thrill  you or send you screaming from the theater. Walking the fine line between serious mystery and parody one is never certain if one is supposed to laugh at the proceedings going on or be on the edge of their seat. I was shaking my head from the get go and I never stopped as Clarkson's efforts to play a mumbly Clint Eastwood never clicked for me. Add  dialog that mixes quantum physics with hard boiled noir cliche and you have a film that is certainly one of a kind.

Part of the problem is there are no real characters. There are position points. We get the ideas behind things but no real notion that anyone on screen is a person. There is heady discussion of quantum physics and astronomy which is used in such away as to make you think its going to be mean something to the mystery as well as the world at large. Every one talks large as if over written by someone who needed to prove themselves smart.  While there are frequent wicked lines of dialog more often than not they hang in the air because real people aren't saying them put a position point.

I suppose that I should be happy that we have an actual film about ideas and about intelligent things but I really would have liked someone I could care about.

While never bad as such it never comes together to be anything I ever will really remember as being other than a game misfire.