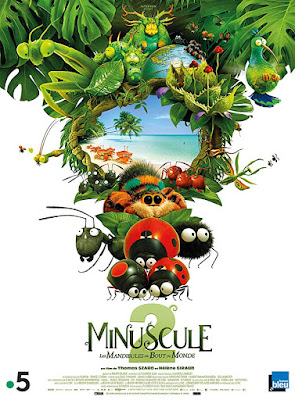 Sequel to  the 2013 feature film which was based on a long running TV series is the further adventures of the ladybug and his friends. Impossible to describe simply the plot goes something like this : When the ladybug's son accidentally gets boxed up and sent to a tropical island, he follows hoping to make a rescue but he can't do it alone and some of his friends have to make the trip to rescue him....

Amusing follow up full of great characters and set pieces delights the eyes and keeps us on the edge of our seats with some wild turns of events, for example a flying model ship held aloft by balloons that ends up inside a shark (You'll have to see the film to know what happens). You'll never guess how this is going to play out no matter how you try. Normally I don't like people talking around me but the row of kids who sat next to me at the NYICFF screening were providing some amusing commentary as they all tried to work out what was going to happen next.

As funny and clever the film is the pacing can be a little slack. Some bits, especially some of the connecting sections, run on a bit too long. While its never kills the the film, it does keep it from topping the first film.

Regardless of the pacing, MINUSCULE is recommended, especially if you can see it on the big screen where the difference in sizes can be appreciated.

For tickets and more information on next weekends final screening go here.