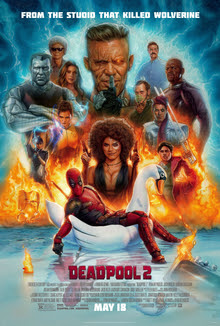 Deadpool is back and he's trying to save the life of a kid that Cable, a soldier from the future, wants to kill in order to prevent his wife and daughter from dying (the kid will grow up to be a homicidal mutant).

Ryan Reynolds is back and we are better for it. While less fresh, we are not seeing the wonders of the merc with a mouth for the first time, this is arguably a better film, since we don't have to sit through an origin story and the filmmakers can just go.

And go they do through numerous action sequences that fill the film from start to finish.Blood is spilled and limbs are severed and the film earns it's R rating. Its so off color and bloody that I'm curious how the PG13 cut plays since its clear a great deal had to be changed.

To me this is a better film because the script is nominally better. Characters arc- not just Deadpool but also Colossus and all the others. There is a cost to the mayhem - Deadpool's girlfriend dies thus setting everything in motion. Its not just guns and quips, but emotion- hell, I got misty a couple of times.

Just as much fun as the first film DEADPOOL 2 is highly recommended to anyone ho liked the first film.
Posted by Steve Kopian at March 01, 2019