Kim Ki-Duk's tale of how a man and a woman become linked by dreams. 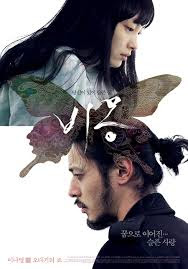 It begins with Jin waking up from a vivid dream involving a car accident. Going to the scene he finds the police are investigating a hit and run accident. Following information from a traffic camera the police go to Ran's home find that she was asleep. Hauled to the police station Ran tries to protest but there are pictures of her driving the car. Jin tries to intercede and soon its discovered that Ran has taken to sleep walking recently.It seems that when ever Jin dreams Ran acts out his dreams but in an opposite way which means that Jin who is trying to see his ex-girlfriend whom he still loves, causes Ran to see her ex boyfriend whom she despises.

This is a dark romantic tale is an often uncomfortable to watch since we know what the dreams mean. Ran is getting hurt because of what Jin is dreaming and there is little that the pair can do. Well acted, we feel for the characters because the actors makes it clear that sometimes its so hard to stay awake. They have created two nice characters that we feel bad for.

Unfortunately the film has a couple of problems that work against the valiant attempts of the actors. First the score is not very good. It seems to belong to some cheesy exploitation film from the 1970's. For me it was all wrong and from the first notes it set a really bad mood. The other problem is that script doesn't really work. The characters are never fully fleshed out and as much as the actors try to breath life into them they sill feel a bit hollow or unformed. The trajectory of the story kind of seems too artificial. The film seems not to always be moving in a natural direction, I had the feeling that the director wanted it to go in a certain direction and thats the way it goes. This being a Kim Ki-Duk film it's ripe with a sense of darkness and or even dread. This is not a wholly happy tale even if it is ultimately a love story (there is some violent imagery).

In the end I don't know what I make of it. I like the idea, I like the characters, but there is something about the way the film is told that rubbed me the wrong way. I think its an interesting misfire. (And lest you think that I don't "get" Kim Ki-Duk's style or his films, understand that I am a fan having all but his films in my collection.) if you're a fan of the director or adventurous, I think its worth trying for the characters and the pieces that work.
Posted by Steve Kopian at March 14, 2019