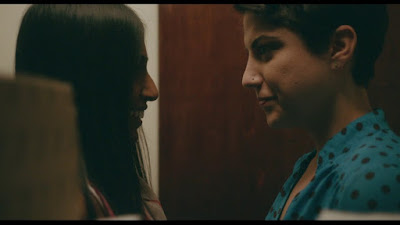 ABOUT A DONKEY is only kind of about a donkey. Certainly the film’s events are triggered by the purchase of a donkey by a family’s patriarch, but what it is really about is the way the family interacts. It is the family interactions which makes the film work.

As much as I like ABOUT A DONKEY (go see it at the Queens World Film Festival I kind of want to shake writer director Christina Raia. While she has crafted a beautifully written and heartfelt family comedy she had saddled it with a donkey. Yes, it makes the film memorable or noticeable, but at the same time many people who should see the film because they are going to love it are going to see the premise and then move on to the next thing. The family drama is so good it doesn’t need a goose. Then again if it didn’t have a donkey in the title I wouldn’t have noticed it and would have missed it.

What I love about this film is that the interplay feels real. Everyone is busting on each other, cracking jokes about everything, but despite that there is a real sense of love. More importantly there is these moments when people are taken aback by the affection under what is being said. There are times when characters suddenly understand that they are understood. I love the exchange when Cecelia is told by her grandmother that she should ask out her aide. Cecelia is shocked that grandma would be so brazen as to ask if her aide liked girls, but was also taken aback that she had feelings that way. It’s a small thing but it rings true and it is the small moments like that that make the film alive.

Donkey aside this is a great filmmaking and great story telling. Director Christina Raia has made a wonderful film that is highly recommended. She has also put herself on my directors to watch list.

ABOUT A DONKEY plays at the Queens World Film Festival March 24. For tickets and more information go here.
Posted by Steve Kopian at March 22, 2019