The conundrum that is Starfish (2018) 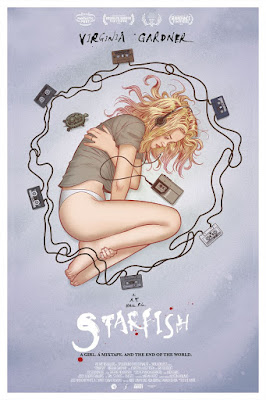 After Aubrey's friend dies, she goes to spend time her friend's apartment. Waking to find the world ended in ice and strange creatures wandering the earth she must try to put things right with the help of a mix tape.

In the days since I first saw STARFISH I've been wrestling with how I feel about it. A beautifully acted and great looking film, it is ultimately trying to be something else. This is what all great horror films are on some level, but in this case I' not sure if it succeeds or not.

Billed as a horror film, the film is also (or wants to be) a meditation on grief and loss and how we deal with it.  Aubrey is literally in her friends world, having broken into her apartment and is dealing with the mystery of the weird signal that ended the world and brought the strange creatures that are now walking the earth.

The sights and sounds of the new world are stunning. The film gives us some of my favorite images of any genre film I've ever run across. When the image and sound track match up the effect will take your breath away and make you audibly react. I found I kept whispering "that's so cool" or "Wow"

However as stunning as the images are and how amazing the moments seem, things don't always hold together. This was especially true when I went back through the film a second time and there are things I let go the first time through figuring they would link up to things later on only to find there were no connections and bits were left hanging. I repeatedly said"hey that doesn't quite work..." (no I can't discuss them because you need to see this film kind of blind)

Part of the problem is the way the film is told. There is an arty edge to everything. It is always reaching to do more than just tell the story. While it wonderfully creates a one of a kind head-space and simpatico with Aubrey there was this gnawing sense that this might have played better, and connected more to the audience if it was more straight forwardly told without some of the flourishes and perhaps even some the music and image sequences which are actually what make the film a film you should try to see.

As much as I love huge swaths of the film, there were and are moments where I felt separate from it and outside of its world. I could feel it going on about being about something but that thing s was kind of alien to me. This was especially true on the second go round when I was trying to make sense of the earlier part of the film based on my knowing what happened and where it was heading.

Honestly over a week since I first saw the film and nine drafts of this review later I honestly don't know what I think or feel about the film. I know I am puzzled enough by the film that I have revisited it several times. Partly to work out what I think and partly to see a number of the sequences again.

I won't try to say if it's a good film or a bad film, rather I'll simply say that if you want to see a film that will engage you and haunt you and make you do more than just see it and then move on see STARFISH.  I have no idea if you will like it or loath it but you will most certainly know you have seen something that will stay with you.

STARFISH opens in select theaters March 13th. It will them open additional theaters through April.