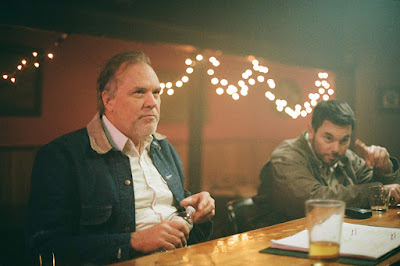 Andrew Paul Davis‘s PALACE is a genuine gem of a film. A lovely little multi-character drama it is a grand graduation of a long time short filmmaker to features.

Set around a bar called Palace the film primarily focuses on Chris. A young man who works at auto repair place. He regularly goes to AA meetings but it is something he only pays lip service to since every night he is knocking them back at the Palace. He lives with his girlfriend and he thinks it’s all shits and giggles until she discovers she’s pregnant. Into the mix we have Chuck,an older man, also in AA with health problems and Alexa young woman at a Christian college who has a love and knack for poetry and rap, which are odd things to want to be part of in a dying Midwestern town. While they are the main focus we also get to know the people in their orbits.

I don’t know whether to thank or smack the Duplass Brothers. While I love that they have set fires under the asses of countless filmmakers to simply go out and create, I despise that many of those they inspire give up their own voices in order to ape their heroes. I mention the brothers because when I was sent PALACE it came with notes mentioning how the film came out of a contest they ran in order to secure financing for the winner. I was instantly wary of the reason stated above, but thankfully Andrew Paul Davis has his own voice and the Duplass Brothers should be thanked for instilling the drive to get the film done.

A great looking film PALACE feels like it is set at the end of the world. These are people off the beaten track and the lights are slowly going down. I loved how one early shot of one of the characters driving through the deserted streets of the town instantly set the mood of a world closing in on its self. There are once grand buildings and wide streets and only a car or two. It’s a simple shot. In a way that means absolutely nothing in the bigger picture of the story but it sets the tone and it sets the world than the ten establishing shots a show off director might have chosen.

Davis‘s script speaks volumes about life. There is an aching lived in to the quality to the lives we see on screen. One kind of wonders what sort of wide varied life Davis must have had since the notes of lives that have taken the wrong turn seem dead on write. I see echoes of my own and the lives of the people around me. There is the quiet desperation and sadness of people who want to change but can’t seem to pull it together or too scared to step away from the safety of this pain.

That it works as well as it does is thanks to a killer cast who seem to be living their lives on screen. Of course it isn’t true, but it feels it. Only Todd Bruno as Chris sometimes feels out of sorts. He feels more like he is channeling Jack Black’s devil may care attitude more than himself. Its only a couple of times and while it isn’t fatal it keeps an otherwise flawless film from being perfect.

This is a film you’ll want to see.

Highly recommended PALACE will be playing at the Queens World Film Festival on March 29th. For more information and tickets go here. 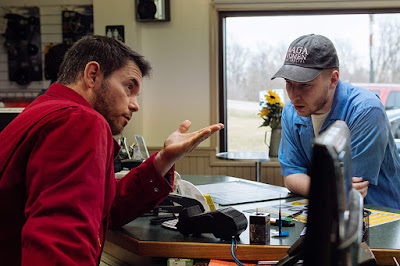