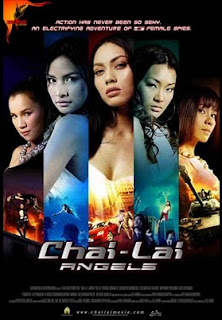 This is a Thai version of Charlie's Angels. Here there are five girls instead of three. Its a total goof.

Everything about the film from the plot (the angels have to protect a little girl who has a rare pearl) to the characters (one is a guy in drag) to the action sequences (they are sending up action sequences) are very silly. At no point are we ever expected to take any of this seriously on any level, even if they are playing it all reasonably straight. If you go in expecting a straight action film you are going to be disappointed. if you go in expecting a Thai blend of action (the action is the reason to see the film) and comedy then you are more likely to have a good time. If there is any flaws its that the film doesn't quite work in the non-action scenes. The comedy there comes off as heavy handed. Thankfully the talking scenes tend to be brief.

Forgive me for not saying more but the plot is very slight. Its the action that stand out, and thankfully its all set pieces beginning with a fight on an airplane that's cross cut with a fight in a house and car chase on to the kidnapping of the girl to a fight in towels in an office tower on and on to the final girls in white dresses bit which takes things about as far as you can go. Its all well done and very tongue and cheek (often suitably cheaply)

Worth a look for action fans with a high tolerance for silly things.
Posted by Steve Kopian at March 16, 2019