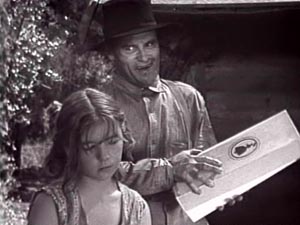 Exploitation classic thats more humorous now then either titillating or shocking. This is an anti-child bride film. Yes there was a time when young, even preteen girls regularly would get married to older men. This is the story of a young girl who may be doomed to suffer such a fate.

A serious subject, the film is now very silly with some acting styles that went out of style in the early days of silents (Watch the scene when Jennie gets up in the morning and try not to fall on the floor laughing.) Give the film points for having some realer characters than many backwoods films coming from Hollywood, but take a few away since this film is really just an exploitation film.

Notorious for a brief flash of nudity in a skinny dipping scene by the then 12 year old star (some prints excise it) its nothing even remotely titillating or sexy. Its actually done in such away as to be fleeting and not even clear. I probably shouldn't have even mentioned it except some people are shocked or horrified by it.

The film itself is better than it should be, however its still not very good. As I said much of it plays more humorous than serious and its so creaky that you can see the machine like plot clacking away towards its conclusion where you end up on the edge of your seat waiting to see if Jennie will suffer a fate worse then death.(Its much less over the top than say a film like Reefer Madness where you can laugh at it, which takes away much of the fun)

If you're a fan of creaky exploitation films give it a try. All others stay away.

CHILD BRIDE plays tonight at The Film Forum in NYC. For more information and tickets go here
Posted by Steve Kopian at March 03, 2019