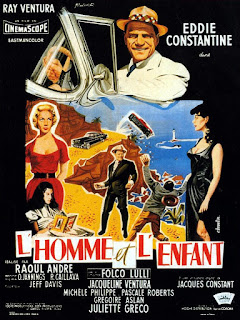 Eddie Constantine plays the head of a perfume company who discovers that his company is being used to smuggle drugs when a man kidnaps Eddie's adopted daughter and demands that Eddie find his daughter who went missing as a result of the drugs coming from his company.

Misnamed film, the girl only shows up at the start and end, is an otherwise pretty good Eddie Constantine film.  Filled with witty remarks and more than its share of suspense this is light entertainment that holds your attention.

As with many Constantine films there is a knowing wink that helps glance over the rough patches. Eddie is clearly aware this is a film in such as the moment when someone doesn't believe who Eddie is in context of the film and says " Yea, well I'm Eddie Constantine" to which Eddie says "Well I have no idea who that is" as he glances into the camera.

Ultimately this is a lot of fun and is recommended.
Posted by Steve Kopian at March 15, 2019