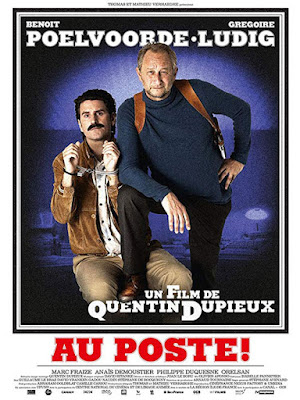 Quentin Dupieux, the man behind RUBBER about an sentient car tire that goes around killing people and REALITY about people in Hollywood watching each other on TV comes KEEP AN EYE OUT a police comedy with and equally bent view of reality and refusal to to go in anything remotely like a straight line.

Nominally the story of a murder investigation it wanders all over the place from the start where a man in his undies conducts an .orchestra in a field. Why? No idea. Conversation take odd turns and characters reveal WTF things to each other for no real reason. Smoke comes a detectives chest as he smokes. It simply goes loopy at every turn.

Is it funny? Yes. Does it add up to anything? Beyond laughs and getting the gears of your mind going? I'm not sure. While I shouldn't knock any film where I laughed a lot when it ended all I could wonder was "Is that all?" Don't get me wrong it is very funny at times but it feels ore like having an appetizer at a restaurant and then discovering that is your meal.(The film barely runs 73 minutes)

Worth a look, especially if you like off the wall comedy. KEEP AN EYE OUT plays at Rendezvous with French Cinema.
Posted by Steve Kopian at March 02, 2019